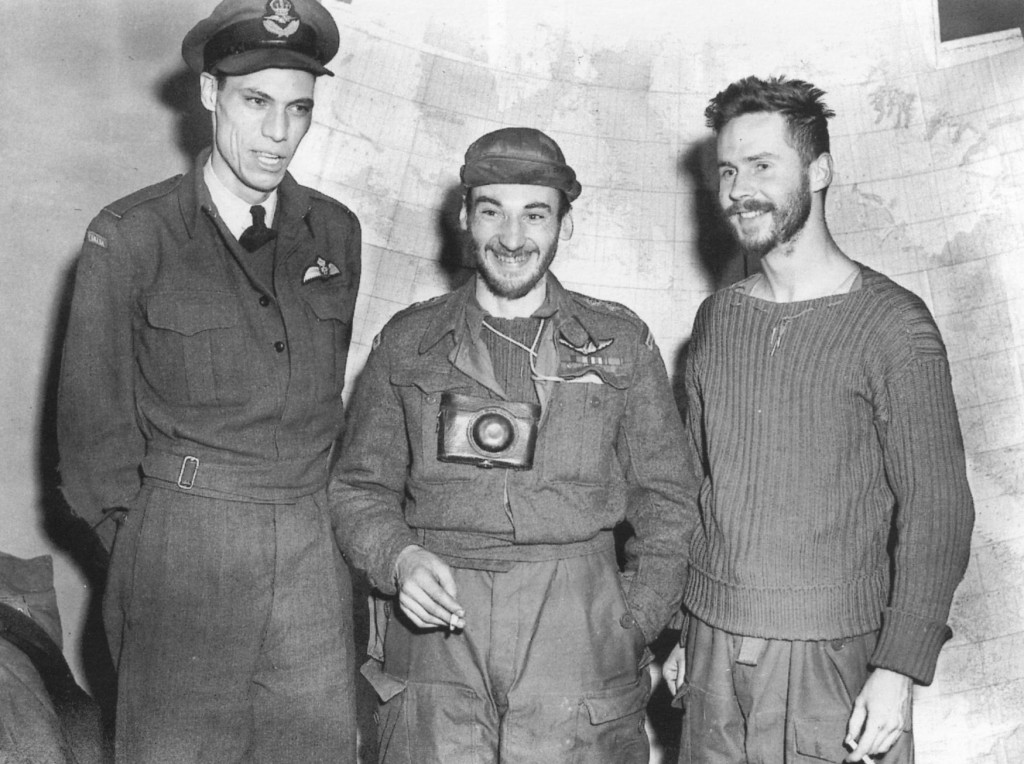 Most military buffs do not know that Canada ever had a Special Air Service (SAS) unit.

During World War II, Canada formed the 1st Canadian Parachute Battalion (1 CPB; 1 Can Para) which served with the British 6th Airborne Division and Canada also contributed a battalion to the joint USA-Canada First Special Service Force (FSSF). The FSSF was disbanded in December 1944 and 1 CPB was disbanded in mid-1945.

The Canadian Special Air Service Company (Cdn SAS Coy) was formed in 1947, although officially it was created 1948 January 9 and it was disbanded in late 1948. The purpose of the unit was officially “home defence” and not special warfare, however the Commanding Officer had served in two special units in WWII. the FSSF and in SOE and he was a “gung ho” (i.e. super keen) officer. He apparently tended to ignore the official mission and trained his unit as a special force type unit.

The Commanding Officer was the late Major Lionel Guy d’Artois and I had the pleasure of interviewing him in his home many years ago. He is regarded by many as one of the grand old men of the Canadian airborne. He had served in the Royal 22nd Regiment (R22R, the “Van Doos”), then he joined the First Special Service Force (FSSF – “The Devil’s Brigade”) where he served as a “Savat” (foot-fighting) instructor. He was on the Kiska invasion in the Aleutian Islands. He later joined Special Operations, Executive (S.O.,E.) as a secret agent and parachuted into France. Post-WWII he rejoined the R22R and served with them in the Korean War. He even married a fellow S.O.,E. agent! She too had parachuted behind enemy lines! He was NOT in the American OSS as claimed on another web site.

The Canadian SAS Company consisted of three platoons – one each from:

For more information see pages 72 to 77 of “IN SEARCH OF PEGASUS” by Bernd Horn and Michel Wyczynski.

I would welcome names and details on any of the members, especially official nominal rolls.

What about the Canadian SAS insignia that is out in the market? It is ALL COMMEMORATIVE, made by the SAS Company veterans’ association for their use. Individual pieces occasionally appear on eBay and perhaps one cannot blame collectors for being excited about these “rare” badges. The badges are very hard to find, but they are definitely “post-service” creations. I confirmed personally with Major Lionel Guy d’Artois that the Canadian SAS NEVER rebadged during its existence. The men continued to wear the badges of their parent units. 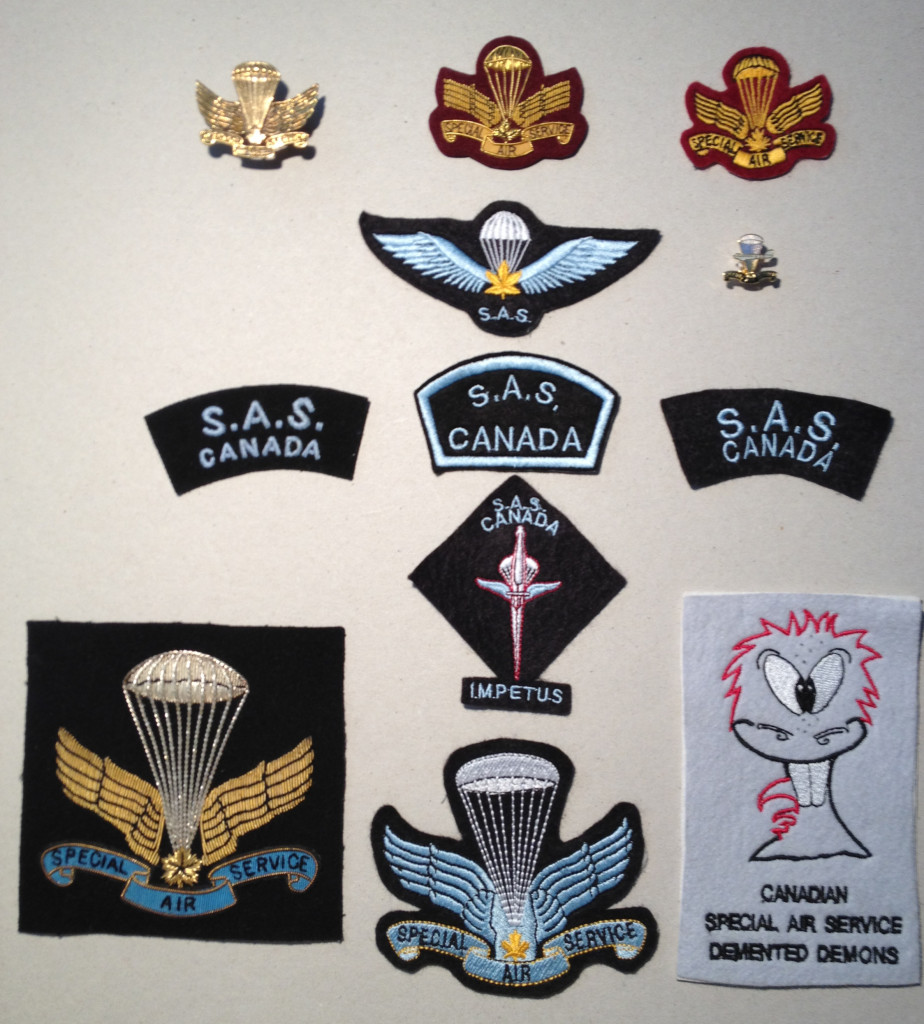 Here is an article written by the man who designed these badges and had them made.

An article from the Military Collectors’ Club of Canada Journal by B.A.J. (Badge) Franklin No. 2400)

“After World War II in 1947 the Canadian Special Air Service was formed and organized by the Canadian Army. It was the first to operate as an airborne unit in 1948.-1949. The Canadian Army want to establish within the army a mobile airborne group capable of performing army inter-service and public duties in the following fields: army air tactical research and development, demonstrations to assist army/air training, airborne firefighting, search and rescue and aid to the civil power.

The S.A.S. was established at Rivers, Manitoba as a normal sub-unit of the army component of the joint air school. It consisted of four officers – Capt. L. G. D’Artois DSO GM (R22Rer), Lt. A. J. M. Angus (R.C.R.), Lt. H. Moncrief (P.P.C.L.I.) and Lt. J.J.R. Lamontagne (R22Rer) and approximately 35 other ranks of each battalion of the three permanent force infantry regiments — R.C.R., P.P.C.L.I. and R22er (in late Oct. 1948 a composite platoon was formed consisting of personnel from R.C.E., R.C.A.C., (Lord Strathcona’s Horse Royal Canadians), R.C.A., R.C.A.S.C., R.C.O.C. and the R.C.E.M.E.) The members, many of whom had served in the wartime parachute units, had to be bachelors, in superb physical condition innovative, self-reliant and immensely quick in thought and action, and to have control, s strong sense of discipline and an original approach.

The Canadian Special Air Service badges were designed by Berkeley A.J. (Badge) Franklin, a former member of the S.A.S. These badges were never worn by the S.A.S. personnel. They proudly wore their own regimental badges. This was due to the short existence of the S.A.S. which was from Jan. 1948 to June 1949.

It was decided by army head quarters (sic) in Ottawa to have three regular force infantry battalions of the Royal Canadian Regiment, Princess Patricia’s Canadian Light Infantry and the Royal 22e Regiment, form the mobile striking force. The S.A.S. badges are commemorative souvenirs and are considered collectibles.”

To assist collectors and provide a reference for the future, I purchased a complete set of Canadian SAS Association insignia from Dr. Bill Windrum who has since passed away. Dr. Windrum was an advanced collector of special units knives and insignia. A Canadian, he had served in the US 511th Parachute Infantry Regiment in the Occupation of Japan.

Cap badges (unofficial, created by Association long after the unit was disbandment)

RETURN TO MY HOME PAGE

This site uses Akismet to reduce spam. Learn how your comment data is processed.