TEMPORARY NOTICE RE: PHOTOS: Due to my closing down my old website (1999-2016 March) and moving the content over to this new web site, I have to reload many of the photos and delete obsolete tables. I am working my way through the website replacing missing photos. Thank you for your patience. 2016-03-14

Here is the same photo with the four Stevens children from Canada identified (tentatively).

An old address. The building pictured above is at Via Salaria and in 2006  November it was the Canadian Embassy!

St. George’s English School, Rome 1961-1962. Marching children doing display marching, probably on a Parent’s Day.  We were a very international school. The girl on the far left appears to be from Africa, the girl in the middle looks like she is from India or Pakistan. My brother David MIGHT be the boy on the right. I believe that I am the boy in the centre, just behind the centre girl. There are lines painted on the asphalt, so it looks like it is a basketball court. Photo probably by the Stevens family.
Fencing exhibition with foils at St. George’s English School in Rome. Probably on Parents’ Day. Left to right: Colin MacGregor Stevens (skinny legs); our fencing instructor the Count of Monte Christo (his REAL title! He taught us in Italian); David Thomas Stevens. Dr. A. H. “Pete” Stevens is standing in background with a camera, just above the boy in the white shoes, white shirt and hat.  This is the professional photographer’s picture. We each had two balloons fastened to our chests. Note that Colin has just sliced off the first of David’s balloons. Colin won the match.  This is between September 1961 and June 1962.
This photo was taken within a few minutes of the other photo, from the other side. This is probably by Dr. A. H. Stevens, our father, who was an expert fencer himself. The Count of Monte Christo is on the far left, then David Stevens, then the professional photographer, then Colin Stevens. 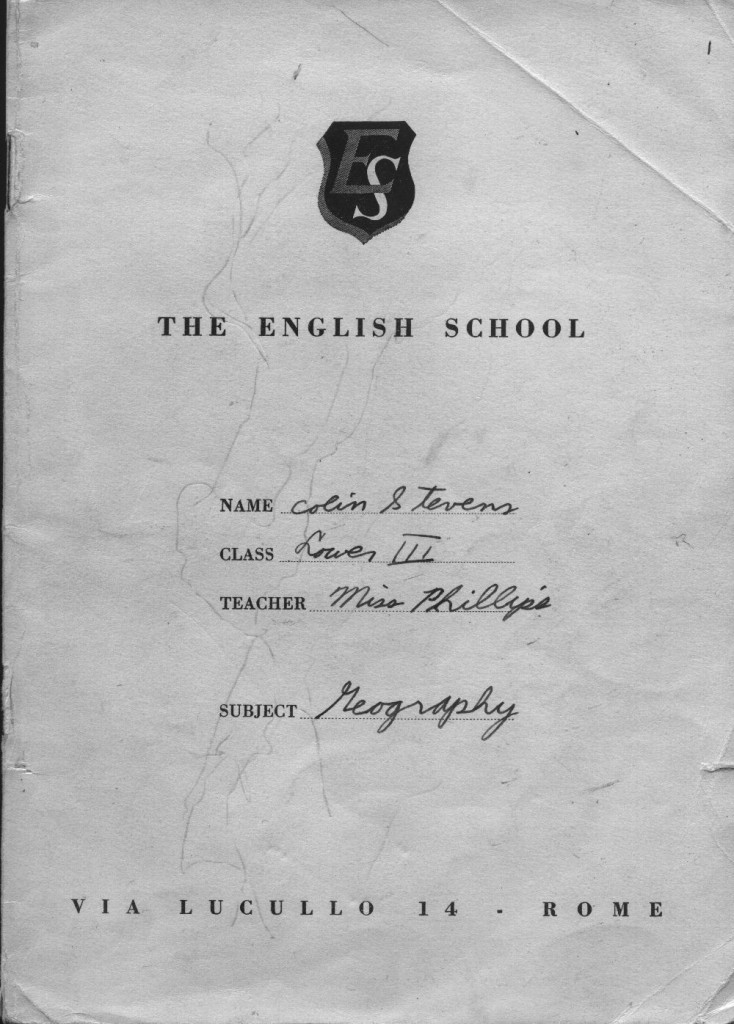 St. George’s English School is located in Rome, Italy. According to some web sites it was established in 1958. It provides education in English and many families working at embassies in Rome have sent their children there.

I attended in September 1961 to June 1962 along with one of my younger brothers (Dave)  and two sisters (Mary and Marjorie).

We wore uniforms which consisted of grey shorts (boys) or skirt (girls), red blazers with the school crest, school ties and little school caps. We practiced cricket in a special practice pitch with netting on the grounds, and took fencing lessons.

The son of my Headmaster wrote to me:

I recall making water bombs out of folded paper and dropping them from a balcony. I SEEM to recall that someone filled one with ink (we used fountain pens in those days) and dropped it so that it landed next to the Headmaster, Mr. Sunley.

We ate lunch in a large hall. Our  prefect sat at the head of the table. Lunch was often a SPAM type of luncheon meat which he would slice up for us. I remember hot, fresh Rosetta buns. Dome shaped, hard on the outside, and hollow. There was a soft bread on the inside of the bun. I have never been able to find these buns since then. 🙁

I remember the smell of the freshly washed stone steps inside the school – not a pleasant smell with the anti-septic that the cleaners used.

I joined the British Boy Scouts there and I remember a camping trip to the area near Pisa, Italy. One of the older boys killed a small bird (with a slingshot as I recall) and the scout leader told him that if he killed it, he had to cook and eat it.

It was a good education at St. George’s. It was at an accelerated pace compared to the Canadian schools as we discovered when we returned to Canada.

One friend I recall was Konstantine Theile from Chile.  He wanted to run a hotel in Chile I believe. As I recall I only had one other Canadian boy in my class (Michael?) and his birthday was the same as mine – 1951 March 08. I gave him a Hardy Boys book for his birthday – and not being a party animal, I read the whole book during the party! Another boy (Michael ? ___? )  I recall was a Canadian, born the same day/month/year that I was.

The school was located in an old castle and there were reportedly catacombs underneath it. In the main hall were fragments of ancient Roman tablets with Latin inscriptions. There were stone steps leading up from the hall to upper levels. In the garden out front was a giant foot, several feet tall as I recall, from an ancient statue.

In 2000 November, I finished reading the first four Harry Potter books and I  keep thinking back to my time in “Hogwarts” … I mean, St. George’s English School.  🙂

How you navigated to this page: www.captainstevens.com > Genealogy > Schools > St. George’s English School