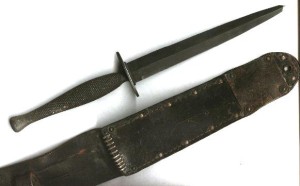 1 Canadian Parachute Battalion’s “Killing Knife”. Made by Camillus for the USMC Raiders. About 15,000 were made, and only about 6,000 were issued to the USMC Raiders. Their version has the maker’s name and USMC in a scroll on the blade. 1 Can Para Bn were issued with an all black and unmarked version. (Colin Stevens’ Collection – This knife was brought home by CPO Byron MacMillan RCNVR who served on board HMCS Prince David. We do not know where he got it, but it was likely off a 1 Can Para Bn member – perhaps in a crap game? It is missing the leg tie down thong, and the belt hanging hook has been removed — it just got in the way for Canadians as it did not fit our gear —  The tip has snapped off and has been resharpened. )

I would very much like to know more about the history of these knives and 1 Can Para Bn. and of other surviving examples. They show up in several of the wartime photos. Were they acquired while the Bn was training at Fort Benning? I have heard that there were not enough to go around. They were more brittle than the F-S Fighting Knife, but the scabbard was more secure in my opinion. Frank Mowat carried one and lost it in battle. He then acquired a ringed grip F-S Fighting Knife and carried that in the above type scabbard. Once, when replacing it in a hurry, the blade pierced the back of the scabbard.

LEFT TO RIGHT: 1 Can Para Bn “Killing Knife” (rare unmarked, all black version of USMC Stiletto), made by Camillus Cutlery in USA) with its  leather scabbard as issued to 1 Can Para Bn [Note: This is a different specimen from the one shown above]; F-S Fighting Knife (normally ringed grip late war production) as issued to some members of 1 Can Para Bn before D-Day invasion; V-42 Commando Knife (replica shown) made for First Special Service Force (FSSF) – ” The Devil’s Brigade”. This formation included 2 Can Para Bn, and some members of it later served in 1 Can Para Bn. (Colin Stevens’ Collection)

M2 US paratrooper switchblade (issued to those who were jump qualified at Fort Benning). See the story of how one of these knives saved the life of my friend, Pte. Cliff Douglas.

Short Magazine Lee Enfield (SMLE) No. 1 Mk. III* – These were used in training, but not in combat although a few modified for grenade launching (“EY”) MIGHT have been used. (.303″)

M1 Garand (Although the inventor was born in Canada it was not issued to 1 Cdn Para Bn. but at least one member of 1 Can Para Bn carried one.  (.30/06). The M1 Garand was briefly issued to Canadian military forces late in WWII and in the mid-1950s.

Misc. captured German pistols such as the 9mm Luger and 9mm P-38

Sten Mk. II (early training only, NOT on operations as far as I know.) (9 mm)

Sten Mk. IIS (one report of silenced Sten being used while battalion was in Germany. Not confirmed yet.) (9 mm)

The Sten Mk. III was NOT carried by the 1 Cdn Para Bn. as far as I know, and probably not by other airborne troops as they usually carried the Sten Mk. II in earlier training and battles, and the Sten Mk. V on 1944-1945’s  operations.

The M1A1 carbine was occasionally carried but was not issued as far as we know. (.30 cal carbine). One photo has been seen of a member of 1 Can Para Bn carrying a folding stock M1A1 or M2 carbine.

Vickers G. O. (Gas Operated) – This RAF/RCAF etc. weapon was used early in WWII on aircraft. It was later was used by SAS, LRDG and Airborne Recce on jeeps, and by Commando troops with a bipod in 1944. They were NOT used by 1 Cdn Para Bn. as far as I know.

RETURN TO MY HOME PAGE