The Ross Rifle was manufactured in Canada before and during World War I. It gained a reputation as an extremely accurate rifle and was used to win many competitions. A few were converted into sniper rifles and they were excellent at that task.

USE AND PROBLEMS WITH THE ROSS RIFLE

The Ross Rifles were sent overseas in 1914 with the Canadian Expeditionary Force. A few were MK. II rifles, mainly with the P.P.C.L.I. (from my research), but mostly the troops carried the MK. III. The rifle was superb in target shooting and sniping, but it had problems in combat.

The soldiers had lost confidence in the Ross Rifle and reportedly picked up Lee-Enfield MK. III and III* rifles from British casualties. The powers that be relented and the Canadian troops were issued British Lee-Enfields. The Ross Rifles were withdrawn except for a few that were retained as sniper rifles.

The Ross was an excellent sniper rifle. Canada continued to use a few of them into the early years of WWII, in training it appears. Then some of the Canadian owned Warner & Swasey scopes were fitted to No. 3 MK. I (P-14) rifles and used in battle in Italy in 1943-44.

Some snipers had great success with the original Ross fine iron sights. Canada ordered 250 of the Model of 1913 Warner & Swasey Musket Sight (a sniper scope) in 1915 and another 250 a little later (1917?). Some rifles were fitted with Winchester A5 scopes, Periscope Prism scopes etc.

Some snipers cut the fore-end down, back to the lower band. This appears to have happened mainly in the 1st Division and other Divisions do not seem to have followed this practice. The reasons for this are unknown. Lightness is one possibility and so is fitting the barrel through an armoured loop-hole. The problem with the second theory is that the loop-hole had to be large enough for the sniper to see through with his telescope which was either mounted on top or on the left side of the rifle.

Warner and Swasey. Note the correct spelling, there is no “y” in the middle Swasey. The book “WITHOUT WARNING” was excellent, but the autrhor misspelled Swasey.  W&S was located in the U.S.A. The American Army bought some Model of 1908 Musket Sights (sniper scopes) and later bought some Model of 1913 Musket Sights. Canada purchased 500 of the Model of 1913 scope, 250 in 1915, and later, another 250. The Americans fitted theirs to Springfield Model of 1903 rifles or to light machine guns. The Canadians fitted their to Ross Mk. III rifles and later to No. 3 MK. I or MK. I* Enfields ( known as Pattern 1914 until 1926). Interestingly, in a 1940 Canadian Ross manual that I have, the illustrations and text are all of the Model of 1908 scope mounted on an American M1903 Springfield which Canada did not use! 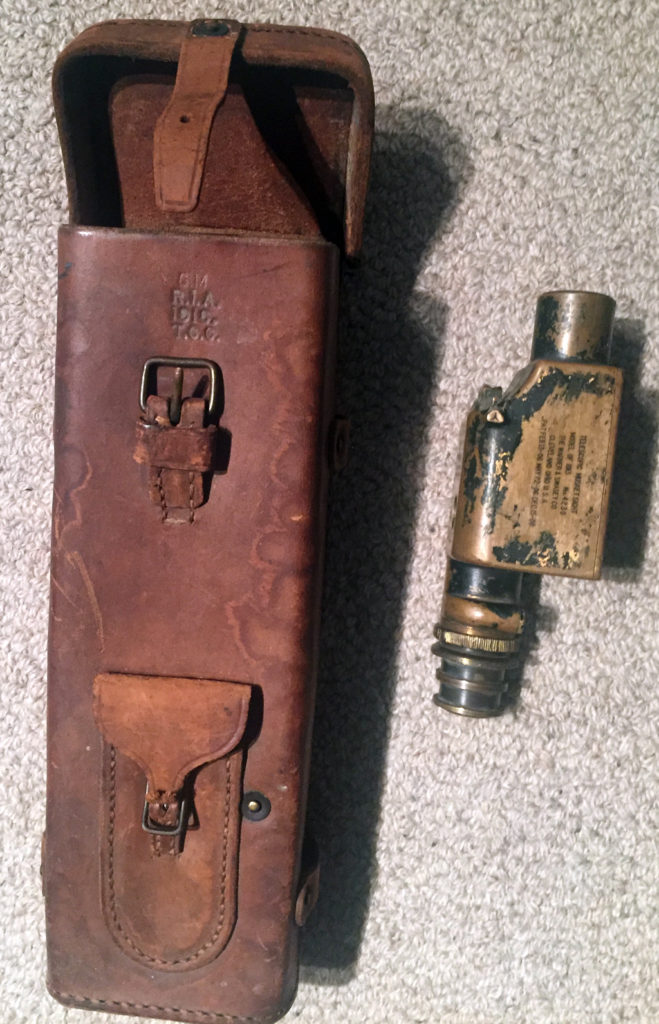 A U.S. Army scope case and scope. The scope is missing its eyeshade and the bracket. (formerly in Colin MacGregor Stevens’ Collection)

On Youtube, a silent film clip entitiled [Cambrai : incomplete] (1917 ?)  posted April 13, 2015. Discovered by Brian McConaghy while sitting in Inchon Airport in South Korea awaiting a flight! At 1:25 into the film to 1:48 is “SNIPING FROM A BATTERED HOUSE (IN ACTION WITH OUR CANADIAN TROOPS.)  The young soldier is definitely using a Ross Mk. III with Model of 1913 Warner & Swasey scope fitted. This is the ONLY moving film footage known to me showing this combination in use. firing fairly quickly, has hat problems and ammunition feed problems.

Only five hundred of these Ross sniper rifles were made and surviving examples are extremely rare.

Royal Winnipeg Rifles Regimental Museum, Winnipeg, Manitoba – Rifle serial number _____ (UNKNOWN TO ME) and Warner & Swasey Model 0f 1913 Musket Sight serial number ____ (UNKNOWN TO ME). This rifle had the forearm cut back and it has a silver plaque on the left side of the butt which states “THIS RIFLE WAS USED BY SNIPER No.710.PTE.P.MCDONALD 8TH BATTALION (90TH RIFLES) WITH IT HE ACCOUNTED FOR 42 GERMANS between March 1915 and 3 January 1916 WHEN HE WAS KILLED BY A SHELL NEAR MESSINES. THE RIFLE WAS PRESENTED TO BRIG. GEN. L. J. LIPSETT, C.M.G. by the 8th Battalion.“ Photographs of this rifle appear in “WITHOUT WARNING” by Clive Law page 9 (top and right photos). I had arranged to go and see this sniper rifle when I was in Winnipeg in 2014 but I was unable to do so as the museum staff had just changed to locks and my guide was unable to get us into the museum. I was in Winnipeg again in 2018, as a military museum Curator on the “Organization of Military Museums of Canada” course, but the museum was undergoing renovations and the Curator refused me access to the rifle.

JT Collection in Canada – Rifle serial number 974 LL 1917 which did not have a scope serial number stamped into the butt. It is now fitted with mismatched scope # 120 and its Canadian case, numbered to Rifle 236 FK 1915. The scope case is also named to Private Patrick Bates of the 78th Battalion, Canadian Expeditionary Force, so there is a very good chance that that scope and case were used at Vimy Ridge in April 1917.

Scotland – I recall reading on the Internet that a Ross Sniper Rifle was preserved up North on one of the islands but I cannot find the reference that this time.

The Army Museum in the Halifax Citadel, Halifax, Nova Scotia – This museum has/had a Ross MK. II (not a MK. III) on display with a Warner & Swasey Musket Sight UPSIDE DOWN  sitting behind it as if it was attached. It appears to be a faked display by an ignorant staff member and I suspect that this rifle does not have a scope base fitted. The only reference that I have come across showing a MK. II (Model 1905) Ross fitted with a sniper scope in on page 8 of “Sniper Rifles of Two World Wars” by William H. Tantum, IV. The legitimacy of that example and its location are unknown to me.

The author of this web site owns a CLONE of a Ross sniper rifle. It was built by someone using an original 1915 Ross rifle (correct year) serial number 300 GG 1915 which was issued to the 12 Battalion, CEF. It was later fitted with an original U.S. issued Warner & Swasey Model of 1913 Musket Sight and an original U.S. issued Warner & Swasey scope bracket. The scope mount base, attached to the rifle may or may not be original. The serial number of the scope and the base match, both being number “5” however the scope was renumbered after it left the factory as the marking is not in line with the other writing and some of the line below has been erased. The scope base is attached to the rifle using dome head screws but the correct screws were apparently flat head.

A collector in Nova Scotia has a Ross Mk.III to which he has added an original Canadian issued scope set to make a sniper clone.

There is reportedly at least one other clone of a Ross sniper rifle in the U.K.

A Ross sniper rifle that is claimed by the seller to be original is for sale on Gunbroker.com in the USA 24 February to March 2, 2021 in Auction 893257385. Based upon the photos posted, I feel that it is likely a clone.

Replicas of the rubber eyeshade were available from Hayes Otoupalik, a surplus dealer in Missoula, Montana, USA. I bough one and it fir perfectly. In service they drilled 3 (?) holes in the side of the rubber eye shield, otherwise, it could stick to the shooter’s face like a suction cup when the rifle was fired.