British and Canadian snipers in World War II were among the best trained and most efficient soldiers on the battlefield.

Theirs is a very important job and in recent years, armies have come to understand that having their own snipers means many lives of their own soldiers are saved and great damage is done to the enemy.

The sniper is the ultimate in efficiency. One shot, one kill – be it an enemy officer, crew-member of a weapons such as a machine gun, or special equipment such as a computer, radio, weapon, vehicle or aircraft.

Many people find the sniper’s job distasteful because a sniper looks through a scope at a human being that they are about the kill. Many of those who feel this way seem to believe that killing by shooting a machine gun, lobbing a mortar bomb or artillery shell, dropping a bomb, firing a torpedo or shooting an airplane down is somehow more humane or noble. In reality, a sniper verifies that the enemy whom he or she is about to shoot is indeed the enemy, and is often a high priority target such as an enemy sniper, enemy officer, radio operator or crew-served weapon operator. Snipers know that by “taking out” their targets, they are saving the lives of  some of their fellow soldiers and civilians.

Snipers have long been vilified by their enemies, who fear him or her, and by fellow soldiers, who view them as outcasts. That has been changing and by 2015, one’s own snipers are viewed as protecting and avenging angels. The term “overwatch” is frequently used as they “cover your back”.

The sniper is the ultimate in efficiency. One shot, one kill – be it an enemy officer, crew-member of weapons such as a machine gun, or more recently, special equipment such as a computer, radio, weapon, vehicle or aircraft.

Today Britain and the United States are probably the World’s leaders in sniping rifles, technology etc. Interestingly the U.S. was a pioneer in sniping, as far back as the U.S. Civil War, however their sniper programs were very slow and poorly equipped in various wars and the U.S. military constantly shut down their sniper programs between wars. As a result, the U.S. equipment was often substandard and the Americans lagged far behind the Allies and the enemy up until the middle of the Vietnam War. The American weapons were usually one war behind. e.g. the M1C and M1D were both developed in 1944. The M1C saw extensive use in the Korean War and the M1D saw use after the Korean War. They have made up for this lag since then.

WANTED: A copy of the British training film “I AM A SNIPER“.

“I AM A SNIPER” This was made just after WWII and features the use of the No. 4 MK. I (T) Lee-Enfield sniper rifle. I showed it to my Reconnaissance Platoon back in the 1970s  and I would love to have a copy of it now … in any format. It was still in use in training Canadian snipers in 1993.

“THE SIEGE OF JADOTVILLE”  (2016) About an Irish Army Company serving with the United Nations that held off a superior attacking force in the Congo in the 1960s. . Lots of Lee-Enfield in use including a No. 4 MK. I (T) as well as L1A1 FNs and Bren Gun. Made for NETFLIX.  Shades of “Saving Private Ryan” the sniper in the movie is once again left-handed and shooting a right handed rifle. The full movie is now on YouTube. Sniper rifle at 37 minutes in shows scope reticle less the horizontal wire. 1hr 44 minutes 33 seconds.

Link to my page on Photographs of Snipers

Milsurps dot com has a Knowledge Library with many detailed photos of firearms including various sniper rifles.

A small sampling is shown below. There are many makes, models and variations.

No. 1 Mk. III* with Pattern 1918 scope. Australia built her own sniper rifles using a heavy barrel version of the No. 1 MK. III* rifle. There were two basic mounts – high and low. They continued to use these through World War II and Korea.

After World War I, Britain dismantled the majority of its sniper rifles. These were mainly SMLE rifles equipped with a variety of scopes. The late war No. 3 MK. I (Pattern 1914) rifles fitted with scopes were farmed out various Commonwealth countries. Canada only acquired two of these. In 1941 Britain had the No. 32 MK. I telescope, designed for the Bren Gun but never installed (which is why the “windage” knob is on the left side so that access to it would not be blocked by the Bren Gun magazine which sits on top of the gun). The Royal Small Arms Factory at Enfield installed No. 32 MK. I scopes onto 1,403 Lee-Enfield No. 4 Mk. I rifles, thus creating the No. 4 MK. I (T) sniper rifle. They then contracted with Holland & Holland to convert more rifles in late 1942. Roughly 26,000 No. 4 rifles were converted to sniper equipment overall.

Most of the Canadian made No. 4 MK. I* (T) rifles and their scopes ended up going into British service. They were intermingled on issue to any Commonwealth country and during rebuilds, Canadian made rifles often ended up with British made scopes and/or brackets being installed. See the “CANADA” section for those models. The rare book “An Armourer’s Apprentice” by Peter Laidler is the prime reference for the production of the No. 4 (T) sniper rifles, dealing with quantities, technical aspects etc.

Canada made a version of the British No. 4 MK. I (T) sniper rifle using a Long Branch No. 4 MK. I* rifle, so it was the No. 4 MK. I* (T). There were some minor variations. The telescopes were mainly made by Research Enterprises Limited (R.E.L.) in Canada, and some were purchased from Lyman in the U.S.A. when not enough R.E.L. scopes were available.

Post-WWII Canada has used a variety of sniper rifles.

In World War I Germany was a leader in sniping. Many soldiers had civilian experience hunting with telescope equipped rifles. Germany had the World’s best optical manufacturers and they entered the war leading the field in machine guns and sniper rifles. After WWI Germany’s military was drastically cut back upon orders of the Victorious Allies.

The main German sniper rifles were: 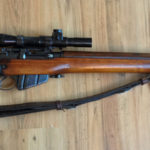 No.4 MK. I* (T) sniper rifle made by SAL at Long Branch in Canada. Serial number 68L3200. This one has the Ishapore screw which was a typical Indian military modification. Right side of whole rifle shown. The scope shown is a mismatched original No. 32 MK. II scope. 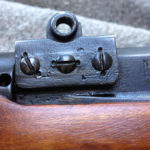 No. 4 MK. I* (T) The front scope pad shows partly obliterated markings which are the Canadian Maltese Cross (meaning non-standard parts) and an upside down “T”. The screws are double staked (to prevent screws coming loose) indicating heavy use. 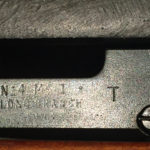 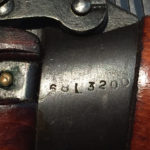 No. 4 MK. I* (T) made by SAL at Long Branch and later issued to the Indian military. Serial number 68L3200. No “TR” stamp on the Canadian made rifles. 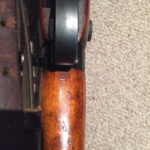 No. 4 MK. I* (T) made by SAL at Long Branch and later issued to the Indian military. Serial number 68L3200. The butt is a U.S. Stevens-Savage made one fitted later in service. Note that their mark for the wood is a squared “S” in a box. The triangle with a “J” mark might be Indian. 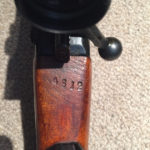 No. 4 MK. I* (T) made by SAL at Long Branch and later issued to the Indian military. This is the serial number of the British scope that was assigned to this rifle in Indian service, a No. 4 MK. I # 4612. The number is stamped on top of the wrist of the butt, just behind the cocking piece. The rifle would have originally been fitted with a Canadian Long Branch butt and an R.E.L. made scope but the butt and scope were changed in Indian military service. 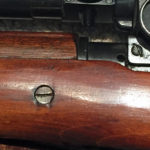 No.4 MK. I* (T) sniper rifle mae by SAL at Long Branch in Canada. Serial number 68L3200. This one has the Ishapore screw which was a typical Indian military modification. Left side shown. 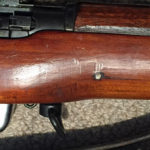 No.4 MK. I* (T) sniper rifle mae by SAL at Long Branch in Canada. Serial number 68L3200. This one has the Ishapore screw which was a typical Indian military modification. Right side shown. 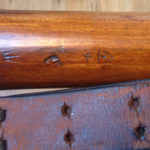 No. 4 MK. I* (T) made by SAL at Long Branch and later issued to the Indian military. Serial number 68L3200. The underside of the forearm in front of the magazine has unusual markings which are believed to be Indian military (e.g. trident shaped stamp and “F” inside a triangle). 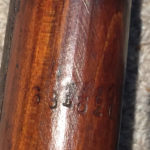 No. 4 MK. I* (T) made by SAL at Long Branch and later issued to the Indian military. Serial number 68L3200. This is the serial number stamped into the underside of the forearm, near the muzzle. The forearm appears to be locally made in India and it has been serial numbered to match the rifle serial number. It did not leave the factory with a serial number there apparently.

The U.S.A. entered World War II two years after the started and they were still without a standardized sniper rifle.

A late 1943 M1903A4 serial number 34221XX. This rifle is original with the blued finish but the M73B1 scope has been refurbished by the military.

M1D 36005XX shown here with a reproduction leather cheek rest, which was needed because the scope was offset to the left. An original cheek rest was later fitted.

The Soviets had perhaps as many as 250,000 sniper scopes and a similar in WWII and this is believed to be the largest number in the World.

How you navigated to this page: www.captainstevens.com > Military & Police > Weapons > Sniper Rifles & Snipers