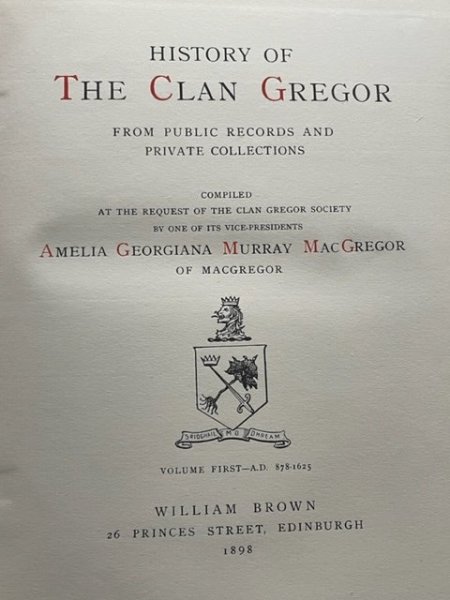 This a two-volume set.

I have worked in museums and archives all of my life and prefer “the real thing”, so I  purchased an original set via www.abebooks.com in 2018. With postage, these cost me Canadian $435.00 which was equal to U.S.$335.15 at the time. I intend to pass these on to my grandchildren.

The good news is that these books have been scanned and are available online for FREE at:

No book is perfect but these two volumes are available.

My problem is that I have been able to trace my MacGregors back to the birth of my ancestor Duncan MACGREGOR in 1792 and the names of his parents. His father was Peter MCGREGOR (1763 ?  – ___?) and and mother Katherine/Catherine MCDARMID (before 27 September 1767 to  28 Nov 1839), married 28 NOV 1788 in Kinloch Rannoch (Fortingall Parish), Perthshire, Scotland. Their five children were:

I have not yet been able to confirm Peter’s birthdate and birth location as there are a number of Peter MacGregors. Some colleagues believe they know which one, but I am bothered by the distance between his birthplace and the known locations of my MacGregors. I do not want to “bark up the wrong (family) tree”!

How you navigated to this page: www.captainstevens.com > Genealogy > MacGREGOR GENEALOGY > HISTORY OF CLAN GREGOR