My MacGregor ancestors are known to have come from Kinloch Rannoch, Perthshire and then Paisley, Renfrewshire, Scotland. Before that they were almost certainly in the MacGregor homelands South West of Loch Rannoch. The spelling varies in the early days e.g. MacGregor, McGregor and McGrigor etc. Spelling of first names also varied in the early 1800s as my MacGregor Letters show. 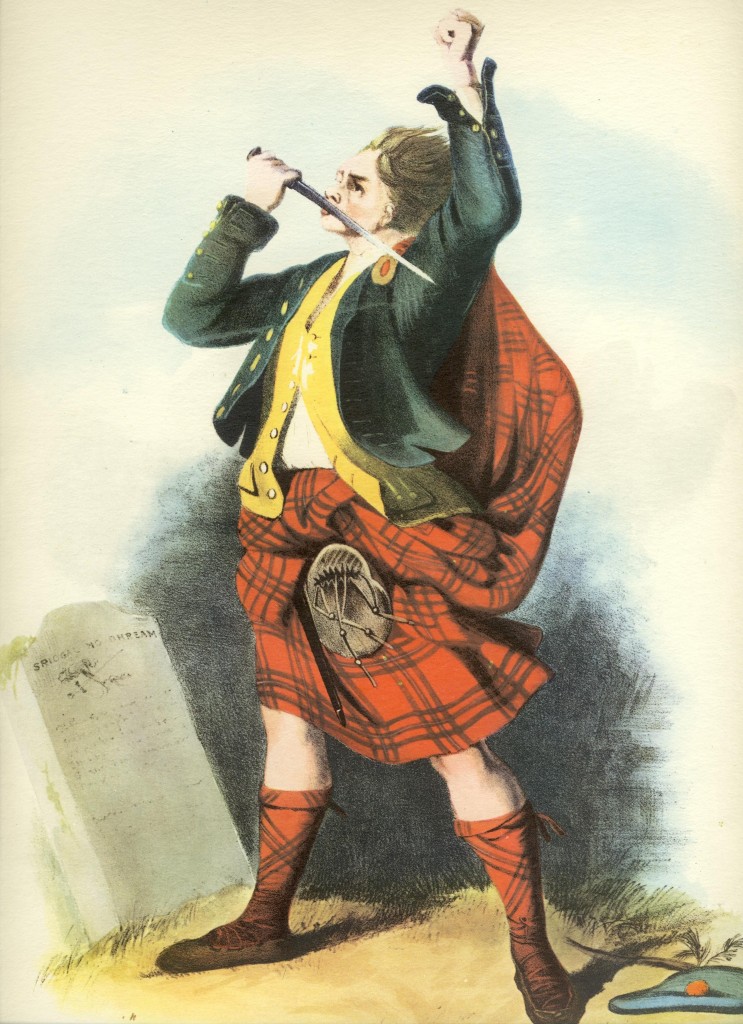 (Royal Is My Race)

The MacGregors were known as a very fierce clan and suffice to say, they greatly annoyed their neighbours and the government. Tracing earlier MacGregor history is very difficult because the MacGregor name was “proscribed” meaning that it was made “illegal”.  Anyone could kill a MacGregor without legal problems, much like the bounty on wolves. This lasted for about 171 years, from 1603 April 3rd to 1774. Charles II repealed the proscription, but William of Orange reinstated it. The famous, or infamous, Rob Roy MacGregor changed his last name to Campbell during this time. The choice was odd, for although it was his mother’s maiden name, the Campbells were a treacherous clan and were much hated by the MacGregors. Many MacGregors changed their names, and even when it became legal again, many did not change the name back as it had been over 1-1/2 centuries. The Clan MacGregor is now using Y-DNA to help prove lineage for Clan membership, regardless of the present last name. This only works through the continuous male lineage however.

MacGregor means “son of Gregor.” The “Mac” also appears as “Mc” or “M’ ” and all are the same. Interestingly I was taught as a child that our Macgregors spelled their name with “Mac and a small ‘g'”, however this was in error as shown by our old family letters where Mac and Mc were both used, as was a capital “G”.

This Clan Gregor Society website link can give you an idea how complicated it is with the name changes.  www   clangregor.com (I have not provided a live link because their website is not secure. 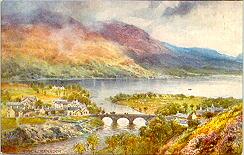 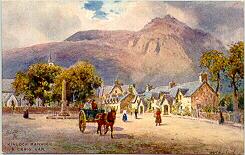 Kinloch Rannoch in Perthshire, Scotland, where our MacGregors lived before moving to Paisley near Glasgow.

Close-up of the first part of the inscription.  The stone is starting to disintegrate.

Duncan Macgregor (circa 1792 – 1852 June 22), a dry goods merchant of Kinloch Rannoch and later Commission Agent of Paisley, Scotland. He wanted to emigrate to Canada but had too much textile stock on hand. His first wife (assuming he was married, no record has yet been found of the marriage or her name), mother of Neil, died. Duncan moved to Paisley, Scotland. Duncan married Esther Henderson and had four more children. He and Esther are buried in Paisley.
Spelling of names:
The names are spelled a variety of ways, even in official records and family correspondence. “Correct” spelling was not important in those days.  e.g.
Niel, Niell, Neil
McGregor, Macgregor, MacGregor.

Family tradition has it that Duncan Macgregor was descended from a nephew of the famous (or infamous) Rob Roy. Research is ongoing, appears that our branch is HOUSE OF GLENGYLE and that we are related through Rob Roy’s wife Helen. Apparent ancestor John GRAHAM of Corerklet was  an uncle of Rob Roy’s wife Helen and therefore of Rob. There is still a lot of work to document and to finalize this.

Niel MacGregor (1816-1876)
Duncan’s first son was my Macgregor ancestor – Niel MacGregor (1816-1874), who came to Canada from Kinloch Rannoch, Scotland about 1831 as a teenage boy to work with his uncle James MacGregor in Chippawa, Upper Canada (now Ontario).
Niel McGregor’s 1825 Gaelic New Testament
Niel was given a New Testament in Gaelic by his former school teacher. The book was published in 1825 in Scotland and was brought to Niel by his Uncle James McGregor who had gone back to Scotland visit the family.

Scans of part of the 1825 New Testament book given to Niel MacGregor when he came to what is now Canada in the early 1830s.

Covers of the book.  Ink inscription inside front cover. “Dear Niel MacGregor …” but the inscription was partially erased at some time in the distant past.   Title page

Page listing the books of the New Testament, and the first page of Mhata.

Carte de Visite of Anna Couse who married Niel MacGregor. Her family was from Clinton, Ontario and had come from Pennsylvania (Mennonite) (Pennsylvania Dutch) and were of German (i.e. Deutsch) origin, apparently from Karlsrue, Southern Germany. They can be traced back to 1607. Her grandparent’s house is the 1816 the Jacob Fry house, now preserved in the Jordan Historical Museum of the Twente near St. Catharines, Ontario.

Neil MacGegor and family, about 1873, probably at 14 or 16 Welland Ave., St. Catharines, Ontario. Neil is believed to be on lawn chair in the centre. His wife Anne is at the upper right with white cap. Beside her with arm around her is Minnie (Mary Maud Macgregor, who in 1874 married William Steven). The girl in Neil’s lap is believed to be Flo. Anne (daughter) is bottom right.

Niel was later a Deputy-Sheriff in St. Catharines, and Welland, Ontario.  He had a large family, but the line mostlydied out with no males bearing children to carry on the name. One daughter was the exception and I am descended from her.

Note that the obituary states that he was a schoolmate with Sir John A. McDonald, Canada’s first Prime Minister and with the Honorable Oliver Mowat, another Father of Confederation. His obituary states that he participated in the [end of December 1838] raid wherein British and Canadians captured the rebel supply ship CAROLINE, set it on fire, and set it adrift above Niagara Falls. Contrary to most published reports, the ship did not go over the falls but stuck at the top. She sank and later broke up. The captured flag is in the Maritime Museum at Stanley Barracks in Toronto, Ontario. The figurehead is in a US museum downstream.  This incident almost started a war between the USA and Canada-UK. Research by Colin Stevens has shown that Neil MacGregor was on one of two boats that were rowed up to the starting point at Chippawa whereas the other boats were towed into place. These two crews were fatigued and became separated during the raid, landed on U.S. property, but returned without entering into the action.

Transcription of a note, probably from to William Arnott Stevens from an aunt or an uncle (they referto “Your mother” or possibly it was written to his sister Edith, who died 1941. The other sister Margaret had died in  1899, when he was a young boy. Transcribed by Colin Stevens who holds the original note.

or something and was moved about.

When Niagara was the county seat they

lived there, then it was moved to

Had an awful time getting away

with me to stay all summer and I

know they really love having me

there. I had no definite excuse or

reason for coming away, except that I

don?t believe in staying as (?) long in

Many heirlooms have been passed down to me. One item I have is the razor that was handed down through Niel (Neil) MacGregor to his daughter Flo Read, to my father A. H. Stevens, to my mother Estelle and thence to me. Bonnie Prince Charlie’s Razor from 1745-1746, presumably after the Battle of Culloden. It is held by Colin MacGregor Stevens (2022).

1885 and 1870 General Service Medals to two MacGregor brothers. I am looking for an original SASKATCHEWAN bar for Albert’s 1885 medal as he was entitled to one according to the medal roll but it is missing.

The 1870 General Service medal on the right was awarded to “Pte. J. C. MacGregor. Ont. R.” i.e. Private James Couse MacGregor of the Ontario Rifles. They trekked across Ontario and Manitoba and arrived in Winnipeg (on the Red River) to defeat the Louis Riel in his first “Riel Rebellion”. Original ribbon and RED RIVER 1870 bar.

The 1885 General Service medal on the left was awarded to a brother of James, “A. J. McGregor W. F. B.” i.e. Private Albert John MacGregor, Winnipeg Field Battery. They were involved in the Battle of Batoche in May, 1885 in Saskatchewan. He was entitled to the SASKATCHEWAN bar for having seen action, but the bar was never claimed or was lost. A replica bar has since been obtained.

By coincidence, Colin MacGregor Stevens later lived in Winnipeg (served in the militia there), and later worked at Batoche as the Interpretive Officer with Parks Canada.
Another heirloom is a MacGregor ring for use with sealing wax. The crest is carved in reverse. This came to Colin Stevens from his father A. H. Stevens who obtained it from his cousin Peggy, daughter of Flo (MacGregor) Read. A similar ring, plain on the sides and larger, was worn by A. H. Stevens but was later lost.
Colin Stevens’ ring. It has now been dated to about 1875.
MacGregor Family Bible 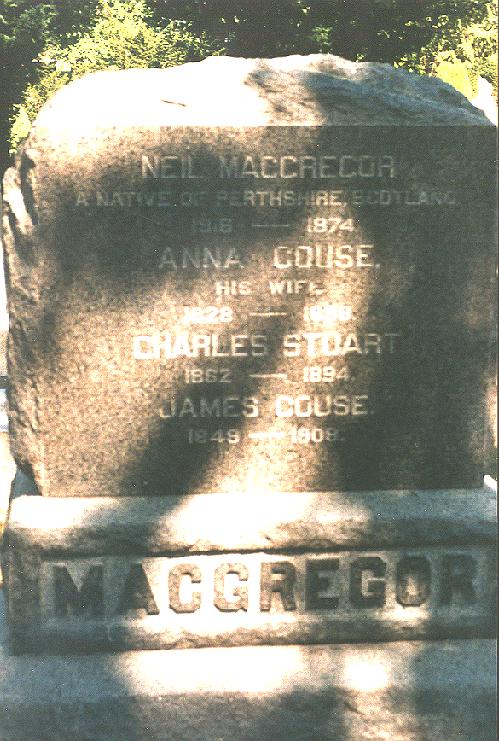 Last resting place of some of our Macgregors of St. Catharines, Ontario.

Off to one side is another large Macgregor headstone that is for the same family, and there are smaller markers on the ground.

To find it, enter the graveyard by the gatehouse, go more or less straight in for about 200 yards and look for huge monument to BEATTY. MacGregors, Stevens and Gardners are just to the right of that.

How you navigated to this page: www.captainstevens.com > Genealogy > MacGREGOR GENEALOGY