There are always items that I am looking for. My hobby  is collecting re: Canadian and British military snipers (mainly WWII). (updated 2021-07-20)

Sometimes a trade or part trade/part cash can be arranged.

Militaria – This may include uniforms, insignia, equipment, weapons, photos etc.

Genealogy – I am especially looking for the following which were awarded to relatives of mine. I would like to purchase these if available or if they are not available, to at least know the location(s) of these items that are connected with relatives.

Canadian military Long Branch Monte Carlo style butts (two). Cheek rest is built into the butt, pistol grip is very pronounced and has a black plastic round bottom cap to extend the grip and there is a rubber recoil pad. There would be Canadian issue markings under the front of the butt grip. There will usually be numbers stamped into the top e.g. 23-C  These are for the 80L8xxx and Scout Sniper Rifles series of sniper rifles.

Windmill sight and furniture (wood) for ASC Experimental Sniper Rifle or a better example of the whole rifle.

Original manual “ARMY TRAINING INSTRUCTION No. 9 THE ORGANIZATION, TRAINING, AND EMPLOYMENT OF SNIPERS     1944”  (I have a reproduction of this) Other original sniper training manuals for Canadian and British armies.

Long Branch brackets for No. 32 scopes. I need two. 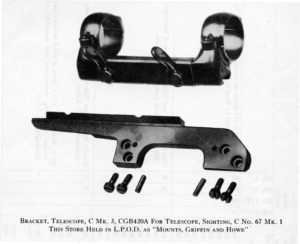 How you navigated to this page: www.captainstevens.com > Militaria For Sale & Wanted > WANTED – Militaria