My father was born in St. Catharines, Ontario. Although his legal name was Arnott Hume Stevens, he was known as “Pete” to everyone including his parents and his wife even though it was not one of his legal names. He also added the ancestral name MacGregor informally at some point.

Why did he chose “Pete” when it was not one of his actual names? He told me that when he was a young child, a school friend would stop by the house on the way to school and call out to him, yelling “Arrrrrrrrrrrrrr-nut! Arrrrrrrrrrrrrr-nut!”  Dad said “Call me Pete.” Surprisingly, he was universally known as “Pete”, even to his parents!

He served as a cadet drummer with the Lincoln and Welland Regiment, then was commissioned as an officer with them by 1939. He served with them in St. Catharines, Ontario, Nanaimo BC and overseas in Newfoundland which was not yet a part of Canada.

Photo  captioned simply as “X” in his album. Machine appears to be a cryptographic machine. He was

authorized to photograph anything that he wished.

Anxious for action, like so many young soldiers at the time, he transferred to the Essex Scottish Regiment which had lost virtually all of its officers at the Dieppe Raid in August 1942. Dad was especially happy that this regiment, originating in Windsor Ontario near where his mother’s family came from, wore the tartan of the Macgregor Clan – which is one of our ancestral families.

Lieutenant (pronounced “lef-tenant” in the Canadian and British armies) A. H. Stevens in 1943 while doing battle  training in England. The rifle is a 1918 Lee Enfield SMLE (No. 1 Mk. III*) which had been used on the Dieppe Raid in August 1942 by the Essex Scottish, brought back by a wounded survivor, found, written off, and then got working by Dad. He had been trained in marksmanship by his father Capt. W.A. Stevens who had been a Musketry Officer in WWI for the 2nd Canadian Division and the Royal Flying Corps (Canada). Dad carried this rifle in preference to an issued Thompson Sub-machine Gun  for several reasons. The rifle was lighter, more accurate and he would not stand out to enemy snipers as an officer as much. He then carried it in training (shown above) and on operation(s) with No. 4 Commando when he was attached to them.  This rifle, sling, P1907 bayonet, scabbard and frog were brought back home in 1944 and are still in the family.

In 1943 he was attached to No. 4 Commando and was wounded in September 1943 on a small Commando raid near St. Pierre Èglise on the Cherbourg Peninsula in France, West of the future D-Day invasion beach code-named UTAH. As he was getting back into the landing craft, he was hit in a leg by a piece of shrapnel. This wound eventually took him off active duty and limited his career options as a surgeon. 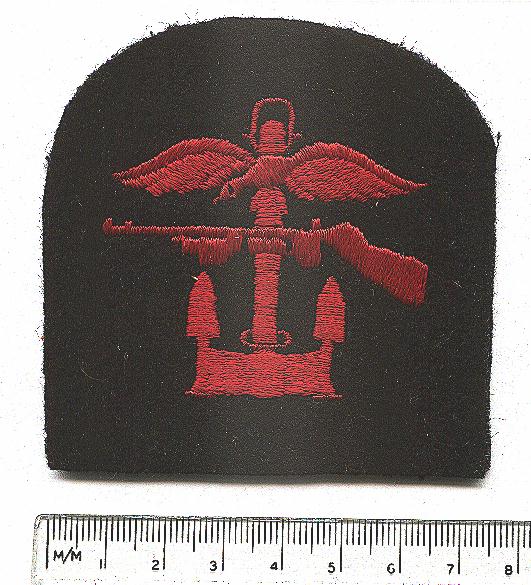 Combined Operations patch issued to my father in 1943 and which he kept as a souvenir. This is the “as issued” Naval trades badge ‘in the standard tombstone’ shape. Army Commando soldiers usually trimmed these to a circle shape. These C.O. patches were worn  in pairs, with the Tommy gun pointing forward. The one shown above is for the left arm. The bird symbolizes the air force, the anchor the navy and the Tommy gun the army – all working together as “Combined Operations”.

Dad’s Wilkinson F-S Fighting Knife that he was issued while serving with No. 4 Commando in 1943. No. 4 Commando gave him a chit and sent him to Wilkinson Sword in London England to pick up a knife. The clerk there asked if he would like his name on it, for a small fee, and he agreed. His name, city and province were etched onto the blade by Wilkinson  Sword staff in London. (Colin Stevens’ collection)

My No. 4 Commando web page.

The leg wound became infected and although he returned to Canada fro treatment at Hamilton, and served as an instructor at Brockville Officer Training Centre, he was eventually released from active service by Christmas 1944.

Left to right: Lieut. A. H Stevens, Governor General of Canada the Earl of Athlone, unknown man. Hamilton, Ont. 1944. Dad is wearing a 21 Army Group patch under his Essex Scottish shoulder title. The kilt it the Macgregor tartan. I have the battledress blouse, kilt and sporran that appear in this photo. Dad had cut off the 21 Army Group patches, and I have replaced these two with other originals that I was able to obtain.

Dad became a Doctor after WWII. He joined the Militia after WWII and served in the Royal Canadian Army Medical Corps (RCAMC) He served as 2ic of the Medical Company in Halifax) and later served as Medical Officer at HMCS Chippawa in Winnipeg, Manitoba. His final rank was Lieutenant Colonel.

Lieutenant Colonel A. H. Stevens. He is wearing the collar badges of his ‘family’ regiment the Lincoln & Welland Regiment. Photo taken circa 1970

He married Estelle and they had five children: Colin, Dave, Mary, Marj and Rob.

In his civilian career Dad trained to be a doctor (GP) at the University of Toronto. He interned at Regina General Hospital (1951) and then practiced in Campbell River, BC and St. Catharines, Ontario. He wanted to become a neuro-surgeon, but his war wound prevented that. He then joined the Federal Government and served with Health and Welfare in Ottawa. While there he made several trips to the Arctic on board the supply ship C. D. Howe. On one occasion he was flown by Weldy Phipps in by tiny aircraft on a pioneering rescue flight in the dead of winter. After landing, he had to travel by dog-sled. An Inuit (Eskimo) village had an epidemic and could not wait for the spring thaw. Dad was able to stop the epidemic.

Dad then took a posting to the Canadian Embassy in London, England. After being there a couple of months, we moved the Rome, Italy where he served at the Embassy.

Dad’s hobbies included photography (he was excellent at this), fencing, shooting, sailing, curling, electronics (he built radios etc.), fishing, carpentry (he built much of our furniture), stamp collecting (as a youth), reading etc. The first thing he did when he moved into a “new” house was build bookshelves and a darkroom for photography.

His ashes are in the MACGREGOR & STEVENS family plot at Victoria Lawn Cemetery in St. Catharines, Ontario. There is a flat gravestone marker.

How you navigated to this page: www.captainstevens.com > Genealogy > STEVENS GENEALOGY > A. H. “Pete” Stevens