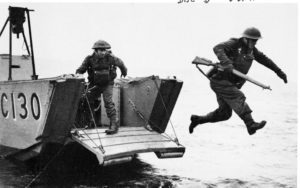 Circa 1942. The Commando troops were among the very first to be issued with the new No. 4 MK. I (T) sniper rifles. This photo shows a Commando sniper leaping ashore from a Landing Craft Infantry (LCI) during training, likely in Scotland. He is carrying a No. 4 MK. I (T) sniper rifle, distinguished by the wooden cheek rest, with the scope dismounted. This rifle was made from an early 1930s Trials No. 4 MK. I as shown by the butt disc. (Imperial War Museum photo)