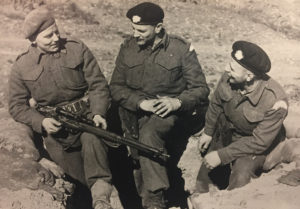 Sniper on left was with the Westminster Regiment. He has an early No. 4 MK. I (T) with low wood for non-existant magazine cut-off and has the eyeshade on the early No. 32 telescope (likely a Mk I, possibly an early MK. II). Centre man has what appears to be a first pattern Canadian holster for the Inglis made No. 2 MK. I* pistol which was not issued until early 1945. The two men on the right are likely Royal Canadian Armoured Corps (black berets and the Westmr. Regt. was in 5th Canadian Armoured Division in WWII. Likely northern Italy or in Holland. – Photo from The Regimental Museum of the Royal Westminster Regiment Historical Society and Museum.

How you navigated to this page: www.captainstevens.com > Military & Police > Weapons > Sniper Rifles & Snipers > Photographs of Snipers > Westmnster Regt sniper circa 1945 1024