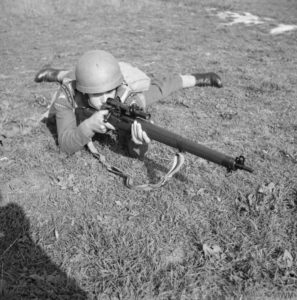 1942 August 29 A sniper with British glider troops. He was with the 1st Battalion, The Ulster Rifles, 1st Airborne Division. He is aiming on of the very first No. 4 MK.I (T) sniper rifles made and issued. This one was made from an early 1930s Trials No. 4 MK. I made by and converted by, the Royal Small Arms Factory at Enfield. Note the extra sling swivel on the upper band, the “wasp-waist” early bversion of the Mark I foresight protector and the magazine cut-off. The scope will be a No. 32 MK. I. (Imperial War Museum photo H23360)