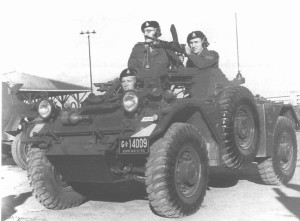 Ferret Scout Car of the 17th Duke of York’s Royal Canadian Hussars in Quebec in 1955. The provincial licence plate is for Quebec 1955. The unit sign on the right appears to rear 17 DOY in black on a white band over an armoured unit sign. The formation sign on the far left is likely Quebec Command (Medium light bluish grey with white QUEBEC COMMAND and a white fleur-de-lis)